Skip to main content
Return to Table of Contents

We have scanned most of the old maps of Hampton and made them available on this website. In some cases the printing is very small and may be illegible on your computer. The images may take some time to fully display on your screen. You may want to download them to your computer and open them in your own graphics program, where you'll be able to shrink and enlarge them as necessary. To do so, right-click on the image and select the save option.

More recent maps in paper form are kept in a map case outside of our New Hampshire Room. A listing can be found in our online catalog.

Map showing the original boundaries of Hampton and Salisbury as granted in 1638. Also the towns into which the original grant has been divided. Also see this high-resolution map of the original town boundaries.

Homes of the original settlers, recreated from published maps and ancient records in 1892

1857 map of Hampton, which shows major roads and geographical features

1889 map of Hampton Center, which is drawing of those buildings in the center of town, then along Exeter Road, done in a way that looks much like later "Sanborn" maps

Historical map created by artist Alex Wallach in 1989, an update to the 1938 Tercentenary map created by Hazel Leavitt Smith for Hampton's 300th's anniversary.

Historical maps from the website of the Hampton Historical Society

Sanborn Fire Insurance maps of Hampton from 1930 are available on microfilm at the library. Ask at the reference desk if you wish to view them. [Also available on the microfilm reel are maps from various years for the towns of Antrim, Ashland, Berlin, Bethlehem, Bristol, Charlestown, Claremont, Concord, Conway, Derry, Dover, East Jaffrey, Enfield, Exeter, Farmington, Franklin, Goffstown, Gorham, Greenville, Hanover, Hillsboro, Hinsdale, Keene, Laconia, Lancaster, Lebanon, Lincoln, Lisbon and Littleton]. Copies of the Hampton maps are also available at the Town Clerk's Office.
The Sanborn map of the White Rocks Section of of Hampton Beach from 1916 was reprinted in Peter Randall's history of Hampton.
Also available in that book is a map of the Hampton River inlet, 1855-1931.

Map of Blakeville, including a description of this Hampton location along Mill Road that was once the home to several Blake families.

Map of the family and town stones in Founder's Park

New stones for the Gove and Dalton families were added after the production of this map. Below are two recent photos taken in the park, one showing the TILTON family stone and the other showing the same stone amongst its neighbors. For another map, as well as images of all of the stones, see the Hampton Historical Society website. 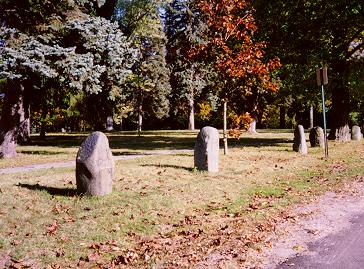 Family stones at Founders' Park
Return to Table of Contents