From August 31, 1950 until his death in 1961, James W. Tucker wrote a column in The Hampton Union entitled "Our Town", covering both historical and contemporary events. As Peter Randall states in the preface to his Hampton: A Century of Town and Beach , "From 1915, when he came to town, until his death in 1961, Tucker was an active participant in, and observer of, town affairs. He wrote about the first half of this century from firsthand knowledge, giving us all facts about our past that many people knew but only he wrote about in detail. He often devoted several columns to a single subject, producing a wealth of information that has saved hundreds of hours of research. That Tucker was given the freedom to write more than 500 columns is a tribute to Edward Seavey, editor of the Union , who realized the value of Tucker's research and viewpoint even if he, Seavey, didn't always agree with the columnist."

Following are a sampling of some of his columns:
[In some cases illustrations have been added
that don't appear in the original newspaper articles.] 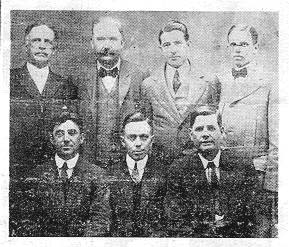